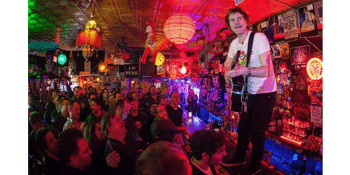 The Foundry, Brisbane (Fortitude Valley, QLD)
Sunday, 7 November 2021 7:00 pm
251 days away
18 Plus
Music
Acoustic
Send this event to
Tommy’s history has been well-documented, but here’s a quick primer: He first
picked up a bass in 1978 at the age of twelve, urged by his guitar-playing big
brother Bob. Together they formed a band called Dogbreath, which featured,
among others, Chris Mars on drums. In 1979, when fledgling musician Paul
Westerberg heard the racket they made blaring out of the basement of a house he
passed on his way home from work, The Replacements were effectively born. Over
the course of eight albums and extensive touring, the band made an indelible
impression. The Replacements broke up in 1991 but their influence can still be felt
to this day.

Since then, Tommy has made lots of music; Bash & Pop Friday Night is Killing
Me (1993) and Anything Could Happen (2017); his more democratic and pop-ish
band Perfect Once, Twice, Three Times a Maybe (2004); plus two solo albums -
Village Gorilla Head (2004) and One Man Mutiny (2011). In addition, he was an
integral part of GnR’s Chinese Democracy (2006) and two albums with his
longtime mates, Soul Asylum - The Silver Lining (2006) and Delayed Reaction
(2011). The Replacements also reared their heads again with cathartic and
unanimously well-received reunion shows in 2013, ‘14 and ‘15. New recordings
were made but ultimately scuttled.

When you listen to a Tommy Stinson record, under any moniker, you’re hearing
rock n’ roll done by a lifer, someone who has literally spent three-fourths of his
time on this earth touring and making music. If you subscribe to the theory that it
takes 10,000 hours to achieve mastery in any field, Tommy Stinson has done that,
many times over.